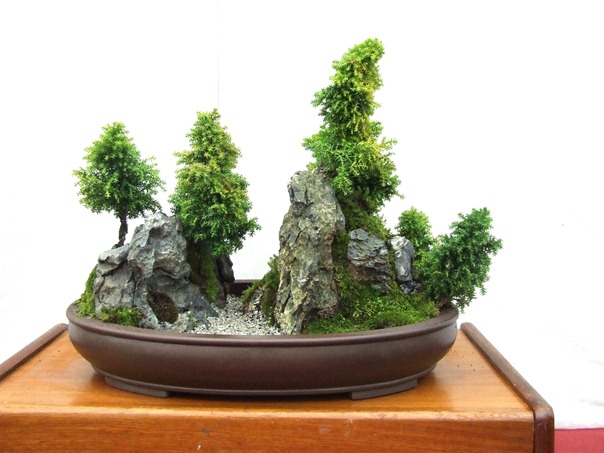 About the International Saikei Association

Dedicated to the art of Saikei and those who practice this art the association was originally set up as the British Saikei Association (BSA) in 1996. The BSA became the International Saikei Association ISA in 2007 after interest from Saikei enthusiasts outside the United Kingdom.

Run by a board we have members in a number of countries these countries each have a regional director who feeds local concerns about Saikei to the board.

The association has a education programme to further assist in the understanding of the beautiful art of Saikei.

Saikei translated from the Japanese as “planted landscape” and today is the art of combining living trees with soil, rocks, water, and related vegetation (like ground cover) to create a miniature landscape.

Toshio Kawamoto developed the art of Saikei in the late 40’s and took his inspiration from bonsai, suiseki and the Japanese arts in general to provide a framework for this art.

Today Saikei is practiced across the world by people of all ages and abilities.

You may wish to join the ever increasing number of individuals and groups who recognise the importance of belonging to an association that constantly seeks to further develop the art of Saikei and support its members.